Robert Gale is the Head Coach of the U18 Canada Mens Team. He also is the assistant of the U17 Mens team. He has the Canadian and USSF A license and is completing the UEFA A License this summer.

Six midfielders inside center circle- divided up into four ten by ten yard squares. Players pair up – one player takes lead and begins moving inside circle- other player reads movement and rule is they cannot be in same half of the circle as their partner. (take turns as lead)

One player has the ball he dribbles inside circle- partner moves without the ball but still cannot be in same half as partner. All Runs must be in shape of 7 (check mark). Players then move ball between them and combine whilst still making runs and being in opposite sides of the circle –both horizontally and vertically.

Central midfield three work inside center circle with 4 10x 10 divisions, each occupying a different quarter each. Players rotate off each other trying to maintain good distances and angles of support for each other. After  a couple of passes with rotation ahead of the ball- little set back pass for deep midfield who hits first time raking ball to flanks- aiming for 20 yard triangle set up on line.

Wide player takes ball out of the air and on the run and delivers cross into area. Midfield three then get another ball and try and work both flanks as appropriate to play.

Coaching Points:Movement of players should be sharp and read off each other tempo in passing combinations.

Set back ball needs to be weighted to allow for first time switch ball.

Wide player should be anticipating driven ball wide and take ball out of the air and in their stride and hit realistic cross on the run.

Midfield rotation – playing out from back

3 players at each end about 50 yards apart. And 3v3 in the middle 30×30 yard square. Players try and rotate in the midfield and switch play from one side to the other- back 3 at each end rotate ball around and look to play forward when movement dictates the pass.

·         Establish the shape of the midfield three early 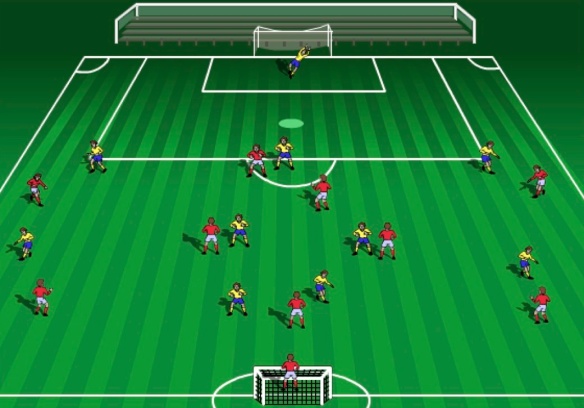 For videos from top Professional Academies check out: