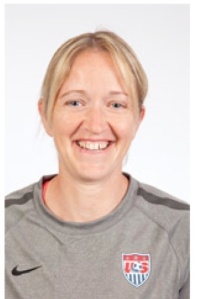 I had the privilege to ask Dawn Scott a few questions on her role with the US women’s National Team. Dawn is originally from England and has worked for the FA. She moved Stateside to start work with the US Women’s National (WNT) in 2010. Before this the WNT didn’t have a fitness trainer and Dawn was recruited to take the teams fitness levels to the next level. The women’s team got to the final of the 2011 world cup and recently just won the Olympic gold in London. Dawn has been a key lecturer on a variety of FA courses including The FA Fitness Trainers Award, UEFA A Licence, International Licence, Youth Coaches, Pro Licence, Diploma courses, as well as having run courses on behalf of CONCACAF in Trinidad and Tobago.

1/ What is your Role at US Soccer?

My key role is with the Senior Women’s National Team.  I have worked with the team since January 2010.  My key role is the physical preparation and development of those players in camp, as well as when they are training on their own and/or with teams.  This involves fitness testing, to determine the needs of individual players, monitoring the players during training and games through the use of GPS units and heart rate monitors, as well as the development of individual strength and conditioning programs.  I also deliver educational workshops with the players with regards recovery strategies, and nutritional/hydration needs.

2/ How important is it monitor a players fitness levels?

This is vital and should be a start point for developing any kind of conditioning program for a player.  This can involve simple tests using a stop watch through to tests using speed timing gates or more complex equipment.  The key thing is to make sure the conditions and equipment used for the test each time are the same to enable comparisons.  Soccer involves many facets of fitness encompassing:  strength, speed, power, speed enduration, agility, flexibility and aerobic endurance.  Testing should reflect the physical demands of soccer and age and position-specific programs should then be planned to optimally develop players.

3/What are the best foods/drinks a player take to optimize performance?

The key nutrient for training and game performance is carbohydrate to fuel the entire session/game.  the key nutrient to aid muscle recovery is protein, so a player’s diet should have a good proportion of those nutrients.  Other nutrients such as vitamin C, B12, D and iron are also vital for elite female athlets.

4/ What is the best post – match snack/meal a player can take?

This should contain a combination of carbohydrate and protein.  So either some kind of smoothie/sports drink immediately post game or Peanut Butter Jelly (Jam) sandwich.  Then as soon as a player can consume some kind of meat (lean chicken/turkey, fish or red meat) along with some white pasta/spaghetti/bread.  Replacing fluid, and sodium, lost through sweat during the game is important also.  As a guide players should weigh themselves (minimal clothing) pre and post game, and then should aim to replace 1.5 times the amount of weight lost through water/sports drink.

5/ Does a players diet differ if they are a youth or pro player?

Yes and no.  the key nutrients are still vital, young players should also focus on consuming a good amount of calcium since they are still growing.  Energy intake will differ, since the training volume/intensity for pro players will tend to be higher, therefore they will have a greater energy requirement.  Also there will be a need for pro players to taper/control their nutritional intakes during certain phases of the season, depending on their main aim of training.

Here is a video of Dawn hard at work with the US Womens national preparing for the 2011 Women’s World Cup.